The online application allows renters to submit all of the information landlords need to screen and qualify someone for an apartment. When I initially joined On-Site back in 2012, the application product we had was called "Online Application 2.0", or "OA2" for short. There were a few issues I quickly noticed:

Likewise, we had received some public feedback about the existing product (mean tweet style):

Needless to say, this user wasn't happy with the experience.

Redesigning an entire product from the ground up is no small feat—and to top it off, On-Site had not done something like that before in its short history. (Even though the existing product was "2.0", it was just the original product with added features that marketing deemed worthy of a 2.0 label.) Internally, I advocated for the project, and the stars finally aligned in December 2015 when the project was approved to begin. The first clients went live with its MVP version in fall 2016, with a small drip of clients being added in 2017 as new features were added.

When I left On-Site, the 2018 goal was to get as many clients switched over as possible as the product matured.

I acted as lead designer for the online application for the entire product's lifetime. Initially, I was also the main advocate for convincing leadership to take on the project and replace the existing application.

For about 6 months towards the end of my tenure at On-Site, I also acted as its product manager. I presided over a series of engineering sprints that added critical features needed for a wider deployment of the product to our clients.

This product's development took place over several years while I was at On-Site. I approached the design differently depending on when my work was taking place:

Before engineering began working on creating the new online app, my design process was fairly simple:

While the product was in development, I took on the following design process:

In addition to the workflows I adopted above, I also set up several forms of UX testing and measurements.

As the product reached MVP status, I began performing several rounds of usability testing on the live product with remote testers. I planned rounds of testing after each set or two of major features went live. Each round consisted of 10 test sessions: 5 on desktop and 5 on mobile (splitting either 2 on iOS and 3 on Android or vice versa). Tasks were uploaded to UserTesting.com to leverage their panel of testers. 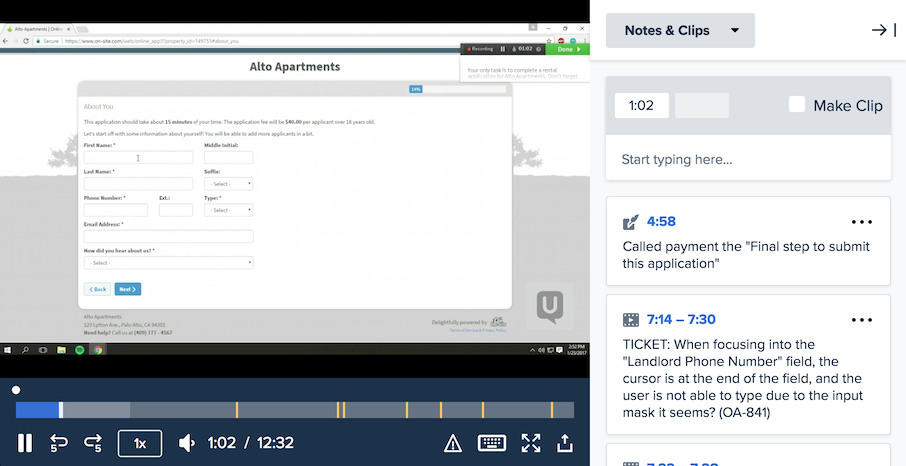 A sample test session, via UserTesting.com

After the end of each round, I reviewed all of the test footage and filed tickets for each of the usability issues I encountered. I worked closely with the product manager to prioritize fixes, and a few times I was able to lobby for an entire engineering sprint dedicated to usability fixes and enhancements. Testing on a regular basis also allowed me to confirm that prior issues no longer popped up.

As the product gained users, I set up a simple survey presented at the end of the funnel. I created the survey using our corporate PollDaddy account and linked it directly in the application.

Placement of the survey link, after the user completed their to-do list.

I monitored results daily (especially the "Did you have any problems filling out your application?" question) to gauge any hot issues that may have come up. (We were releasing new code every 2-3 weeks. The day after a release was when this question was particularly useful.)

FullStory is a tool that allows you to record user sessions on your website based on Javascript events and DOM changes. It pieces the data together to give you a "video" that you can play back. In addition, you can search for sessions based on where in your product they went, what they clicked, or the meta data that you can provide.

I hooked up FullStory to the online application as more users began to use it daily. I was able to spend time observing real users and how they interacted with our product. I was able to catch multiple usability issues with a random sampling of videos. Coupled with the qualitative survey above, it was also a great resource to get more details when a user reported a problem in the survey. (And on a few occasions, when a client reported a problem!)

Below are some screenshots of the product, as it stood in February 2018: 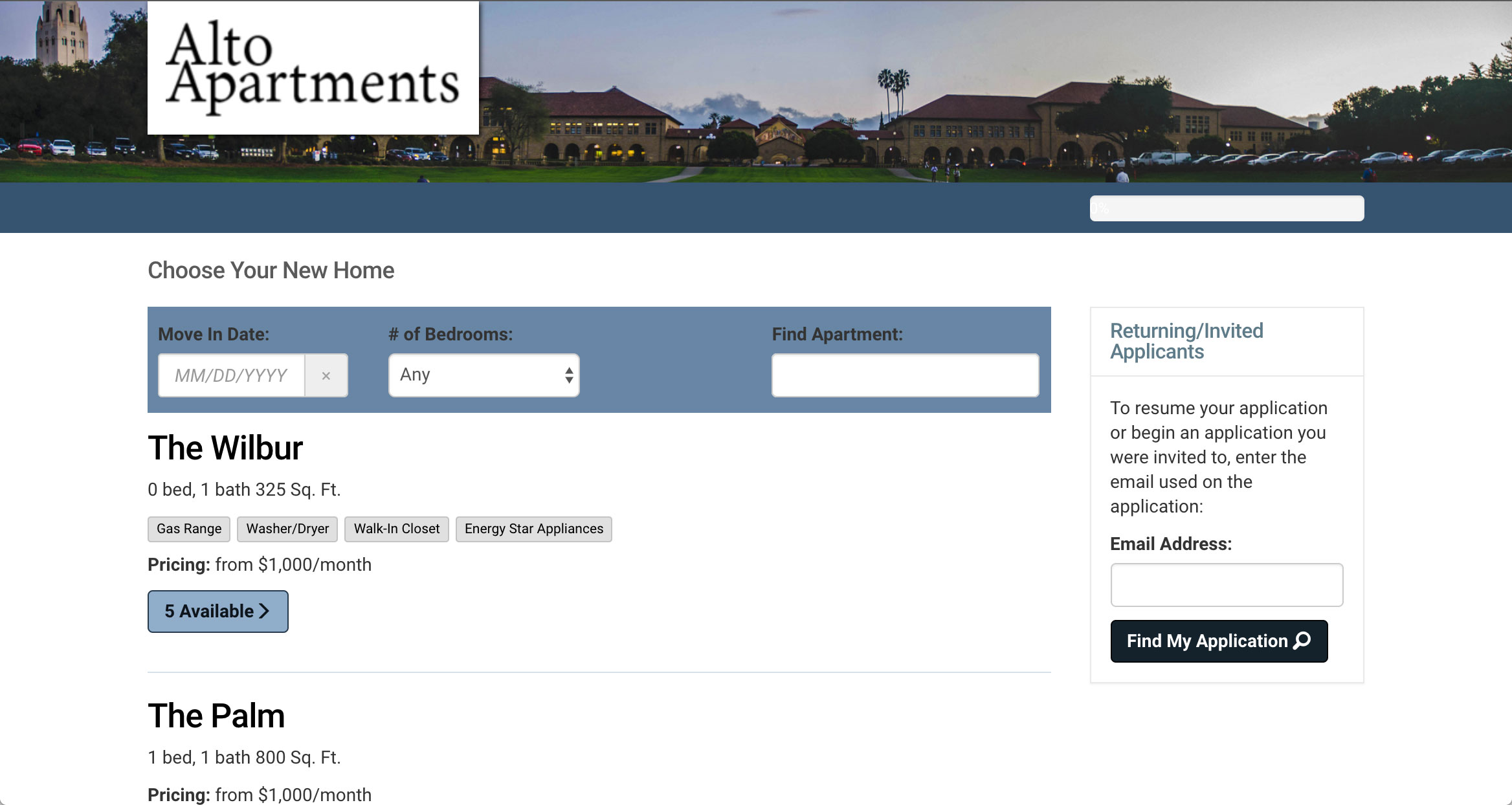 The first page of the application. Here, users will choose which unit they would like to move into. 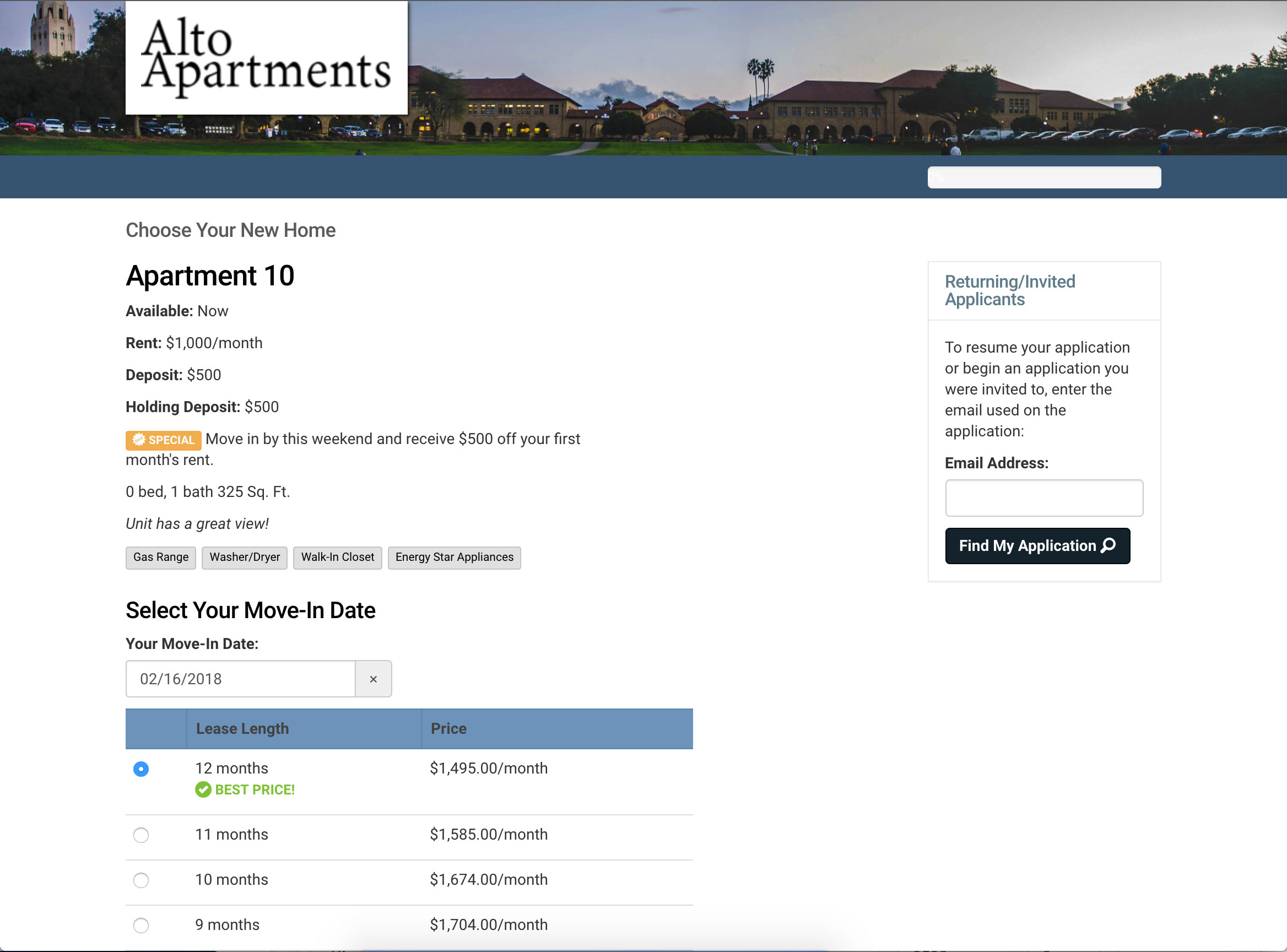 Each apartment had an individual page listing details, amenities, and pricing. 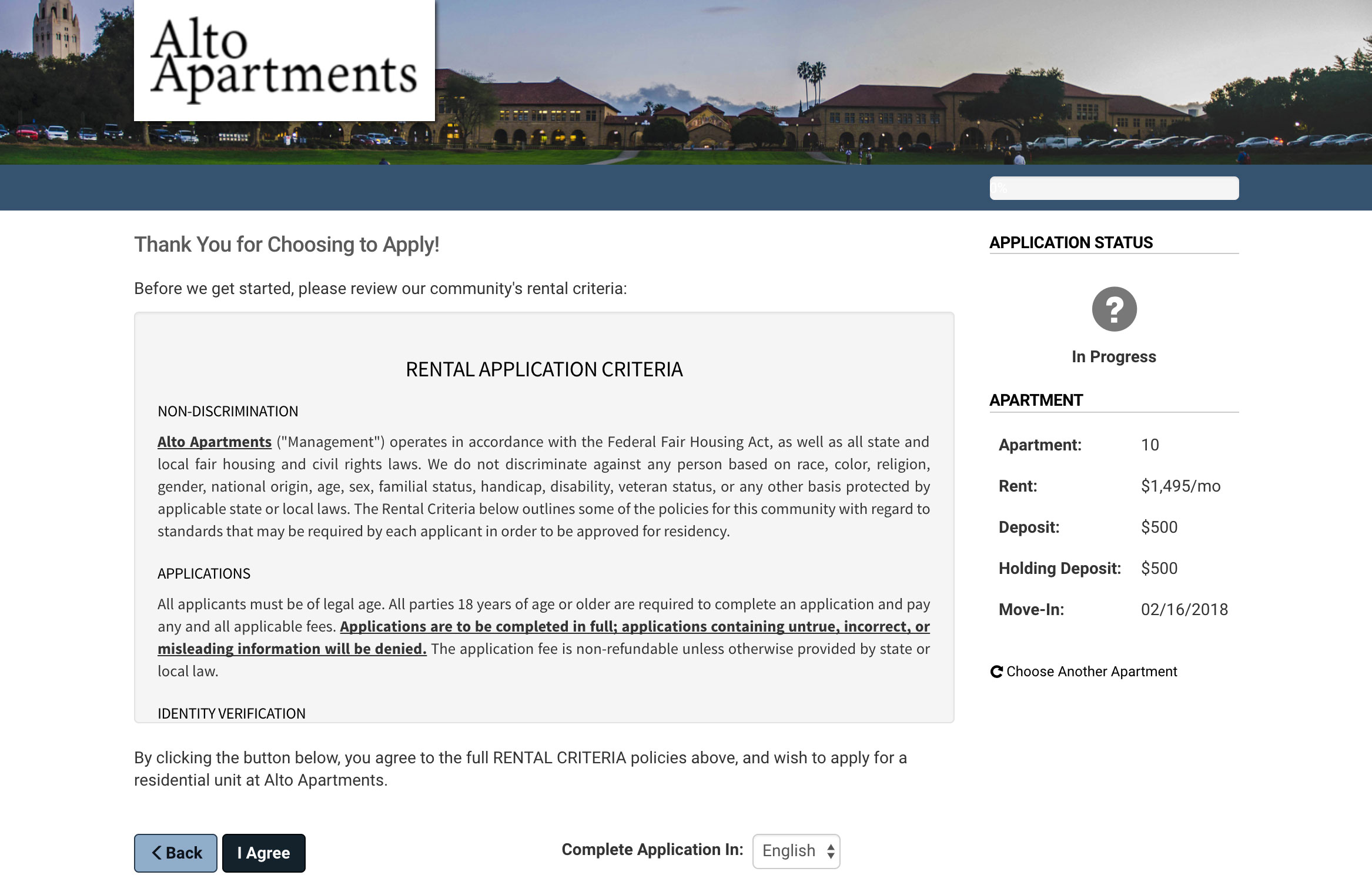 After choosing a unit, the application itself would begin with a review of the rental criteria. 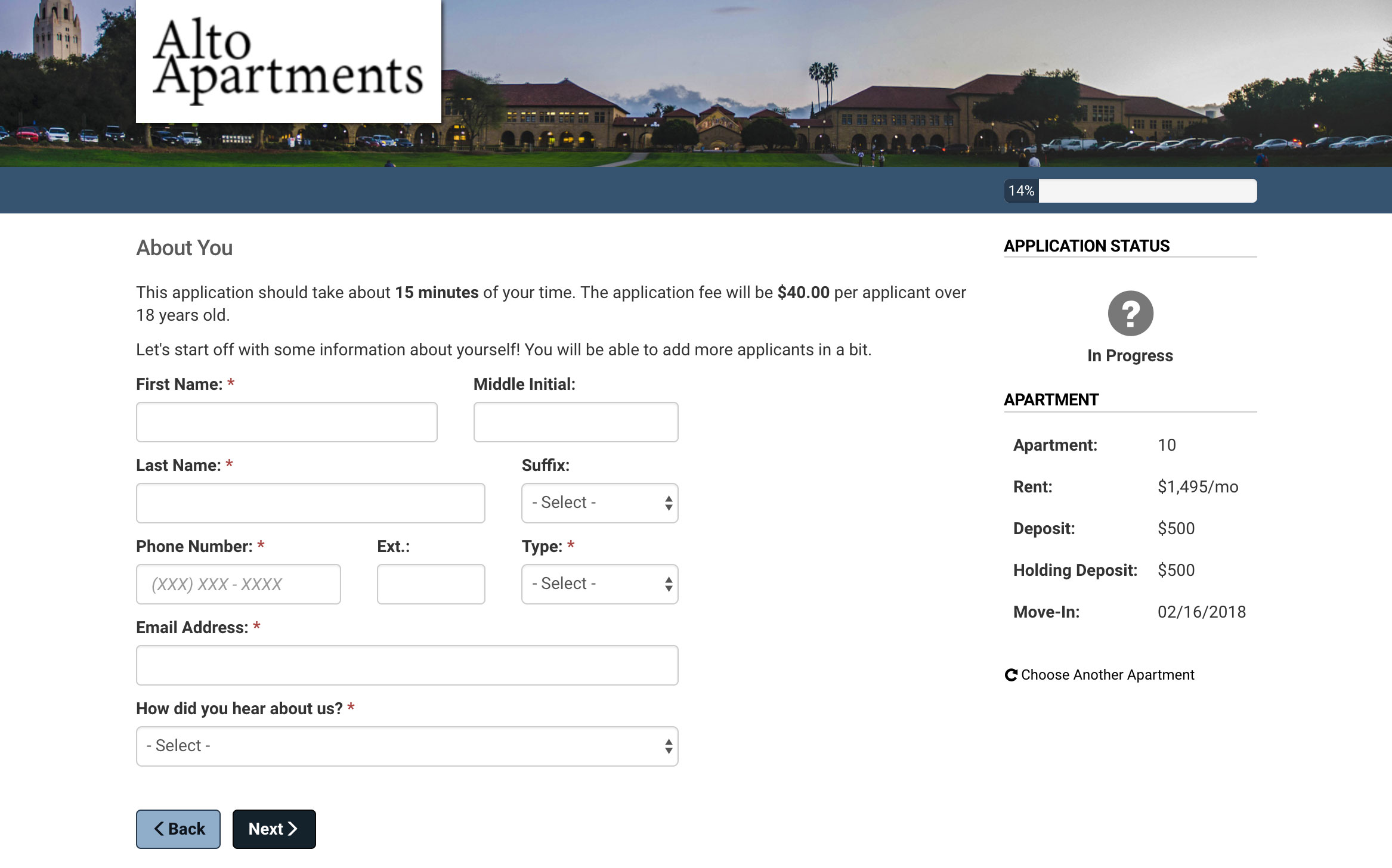 I tried to keep the "About You" page minimal—no more asking for a Social Security Number here! Everything in the first part of the application was intended to be provided from the user's memory. We didn't want them stopping to go find a piece of information before getting committed to the process. 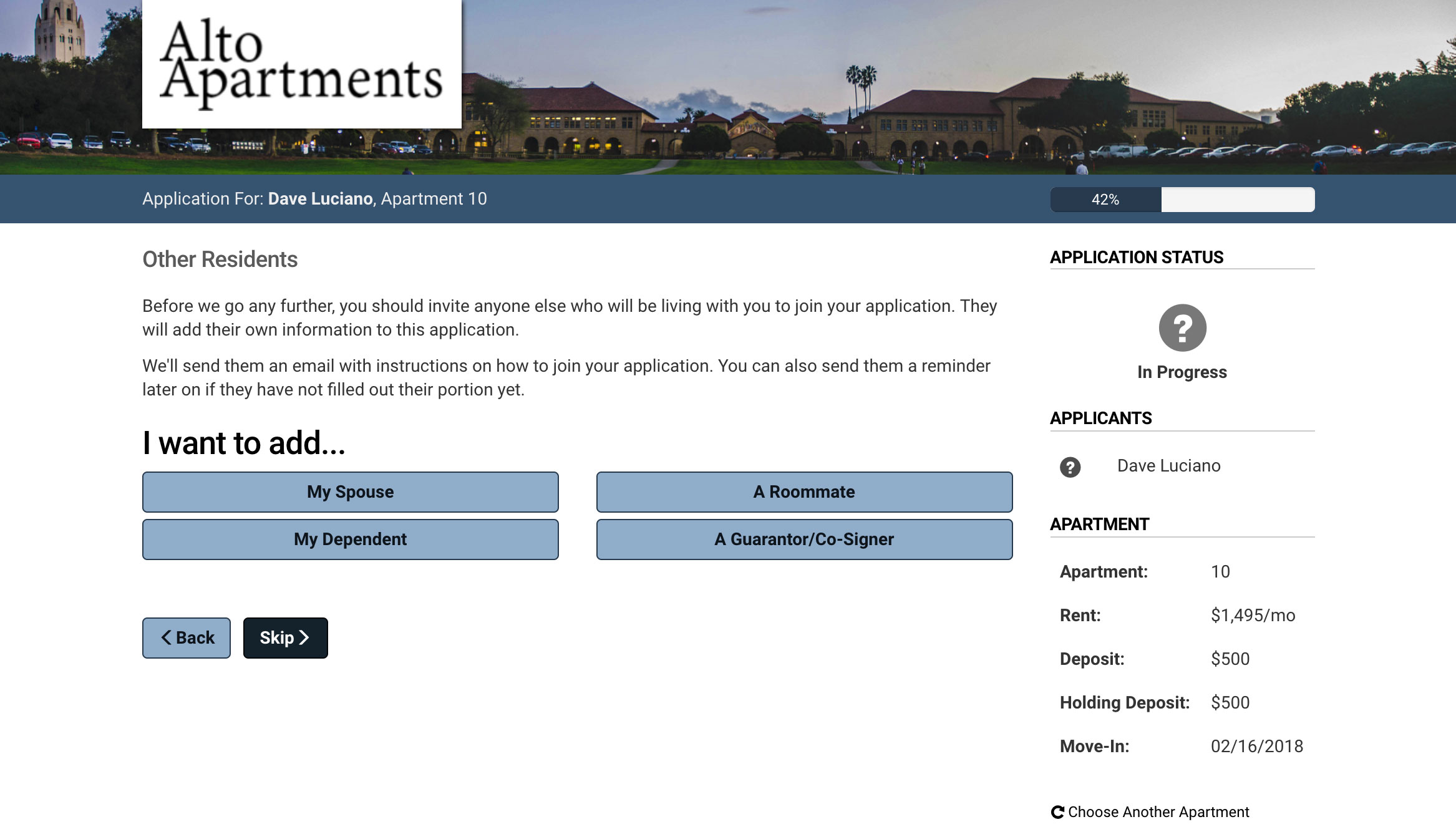 Once we knew who the applicant was, we would ask them to list any other residents they wanted to apply with. 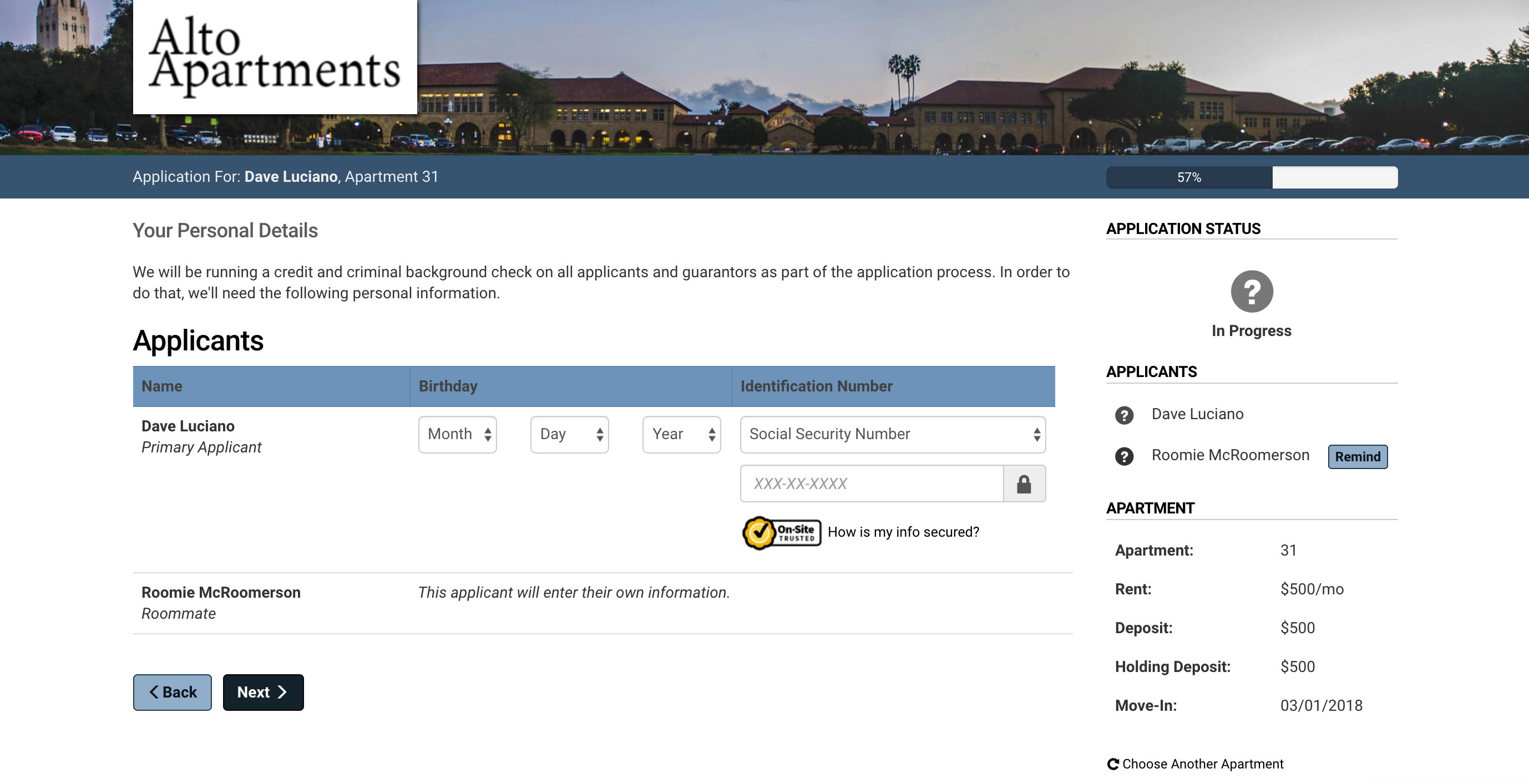 Here's where we started to get serious. The step following this will ask for the application fee, so I wanted to make sure we asked for the personal information before the user had money on the line. (I wanted to avoid the feeling of a "bait and switch," as a number of users were sensitive when it came to providing a Social Security Number.) 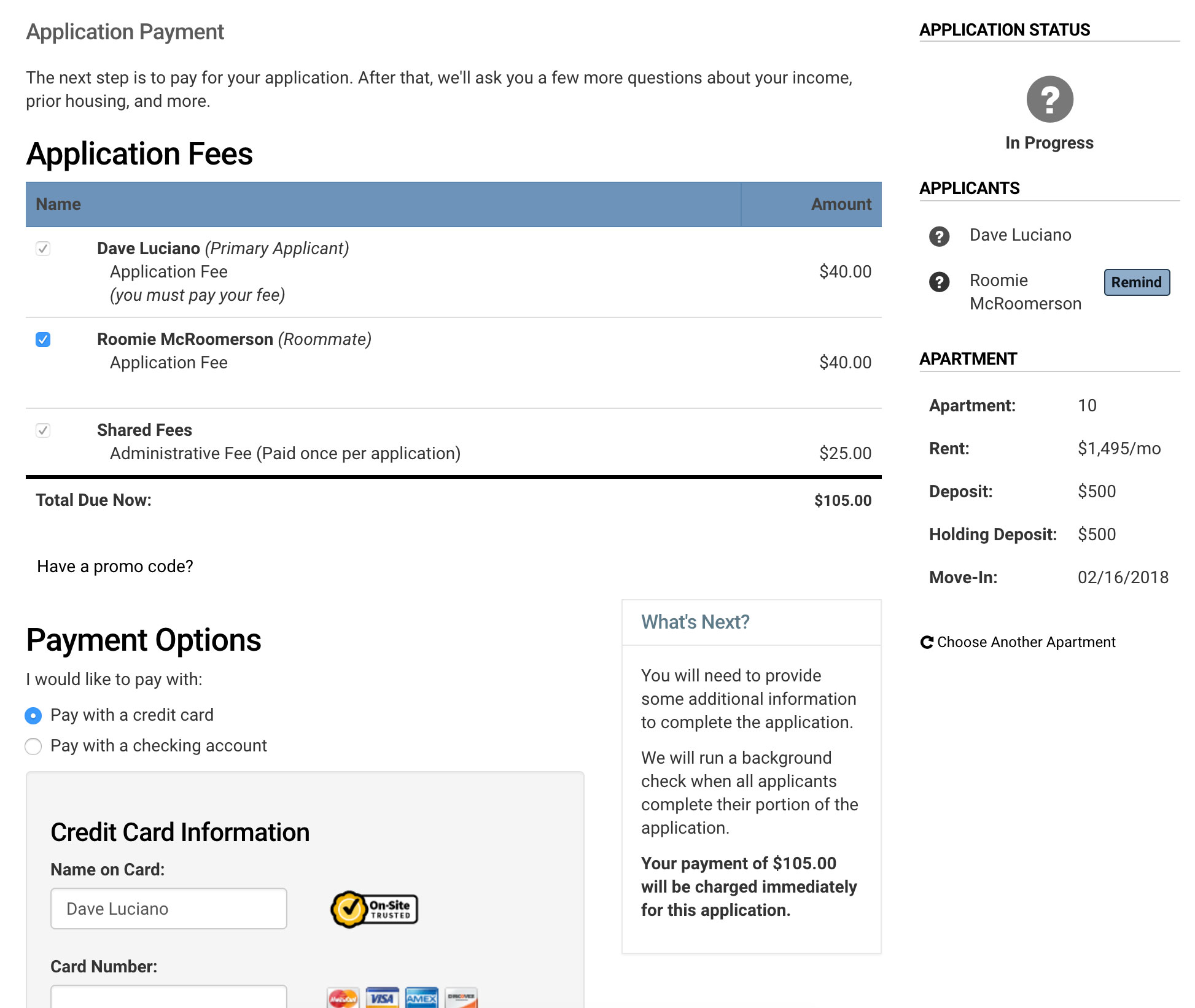 Our clients enjoyed collecting fees, much to my chagrin. Our payment page had to support multiple fee types (application fees, administrative fees, convenience fees...), along with credit card and ACH payment options. We even squeezed in promo codes! Communication about what was being charged and how we would charge it was very important. 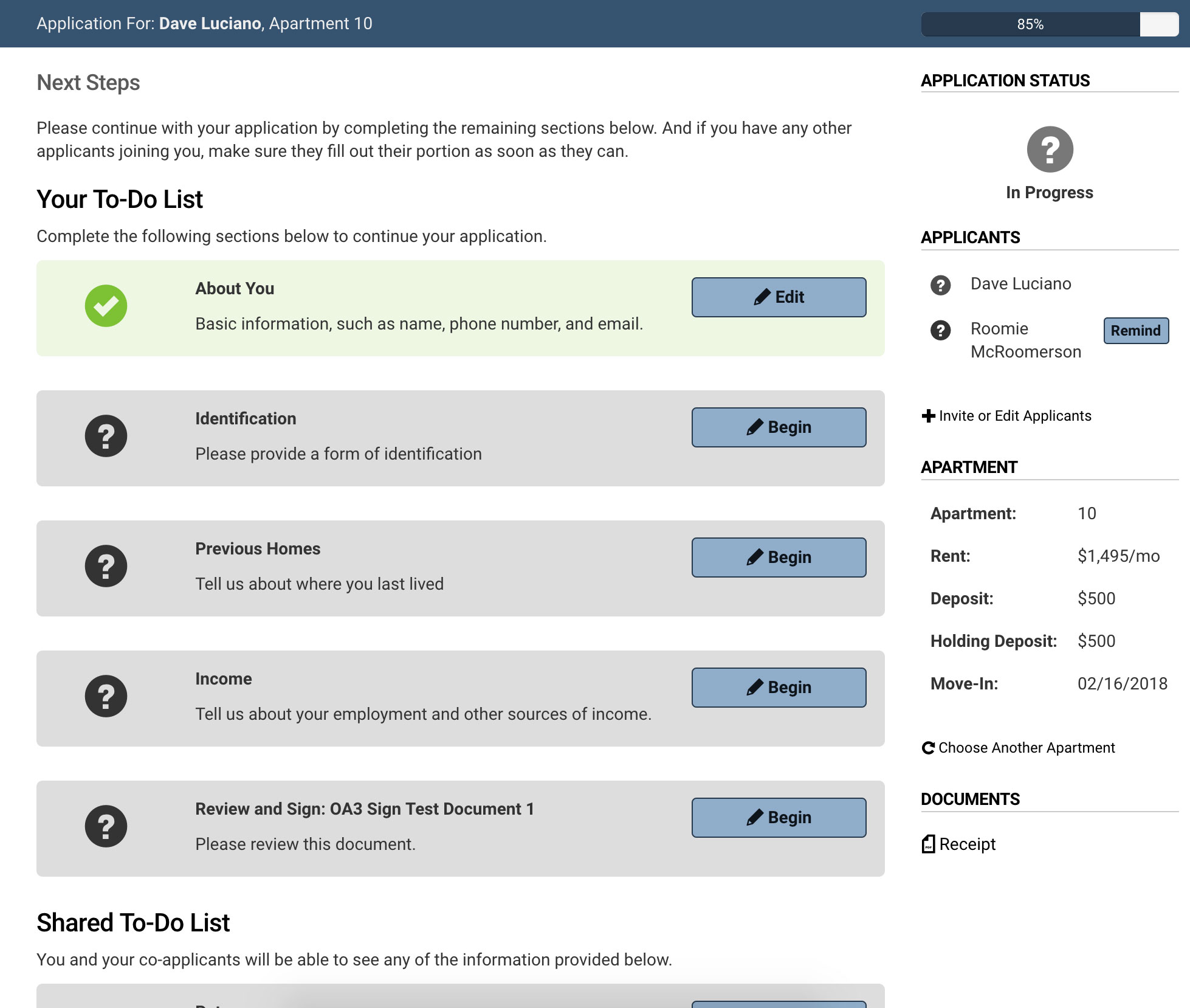 After getting a financial commitment from the user, we would get into the meat of the rental application. The to-do list could include: photo ID number, previous home/landlord information, income sources, vehicle information, pet information, and any arbitrary document that the client wanted applicants to review and sign. 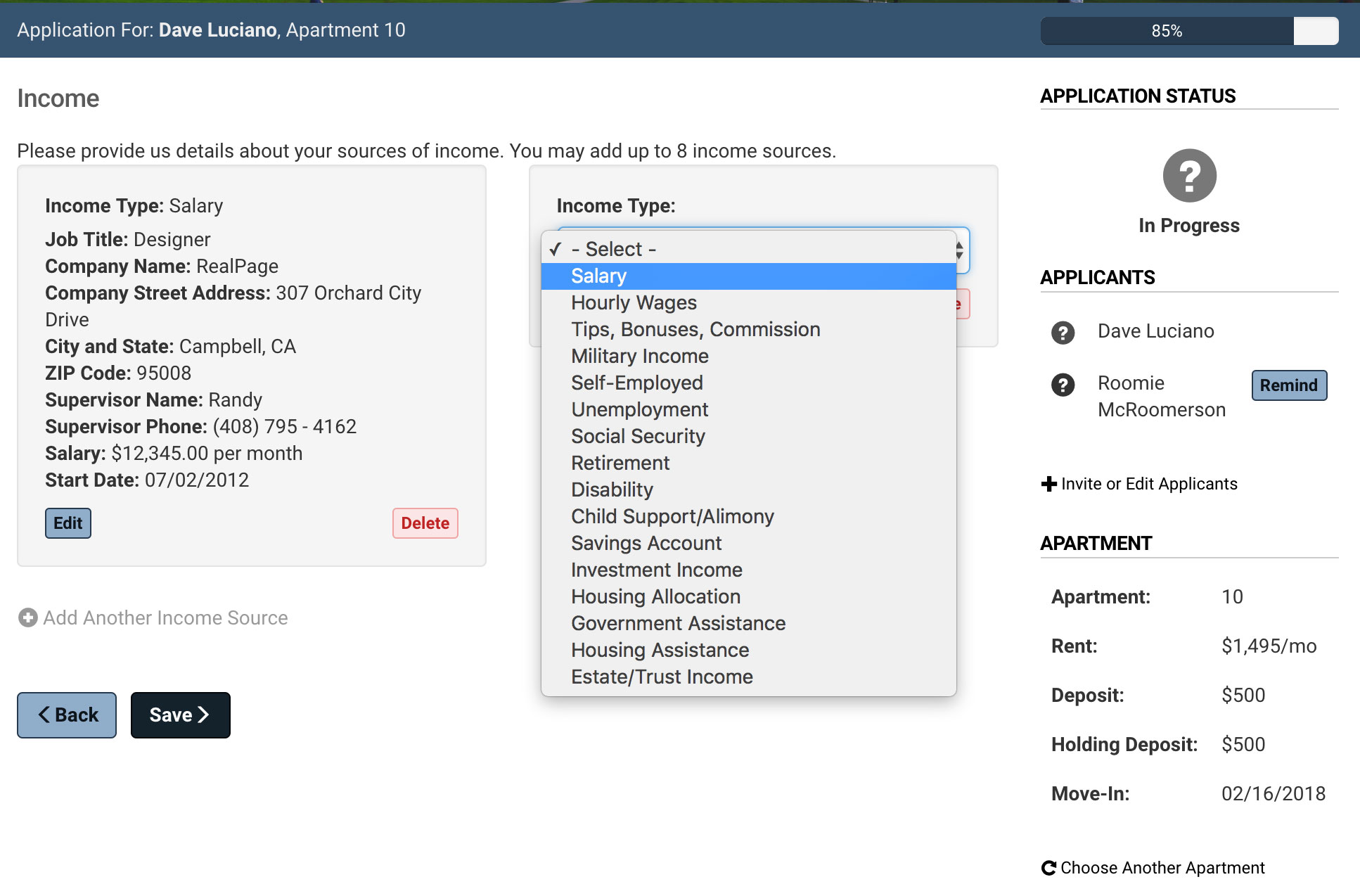 Here's what the income section looked like. We supported a wide variety of income sources. 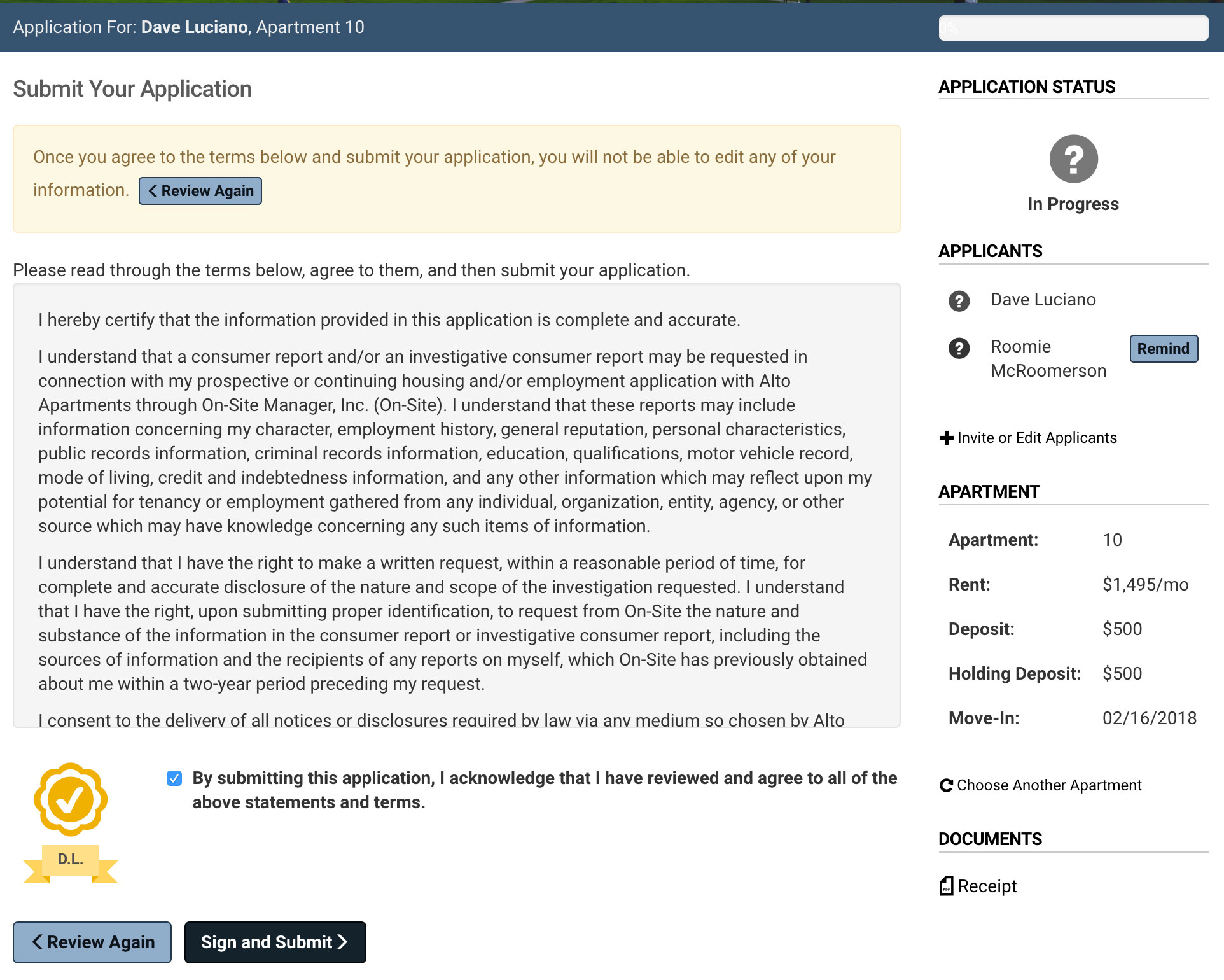 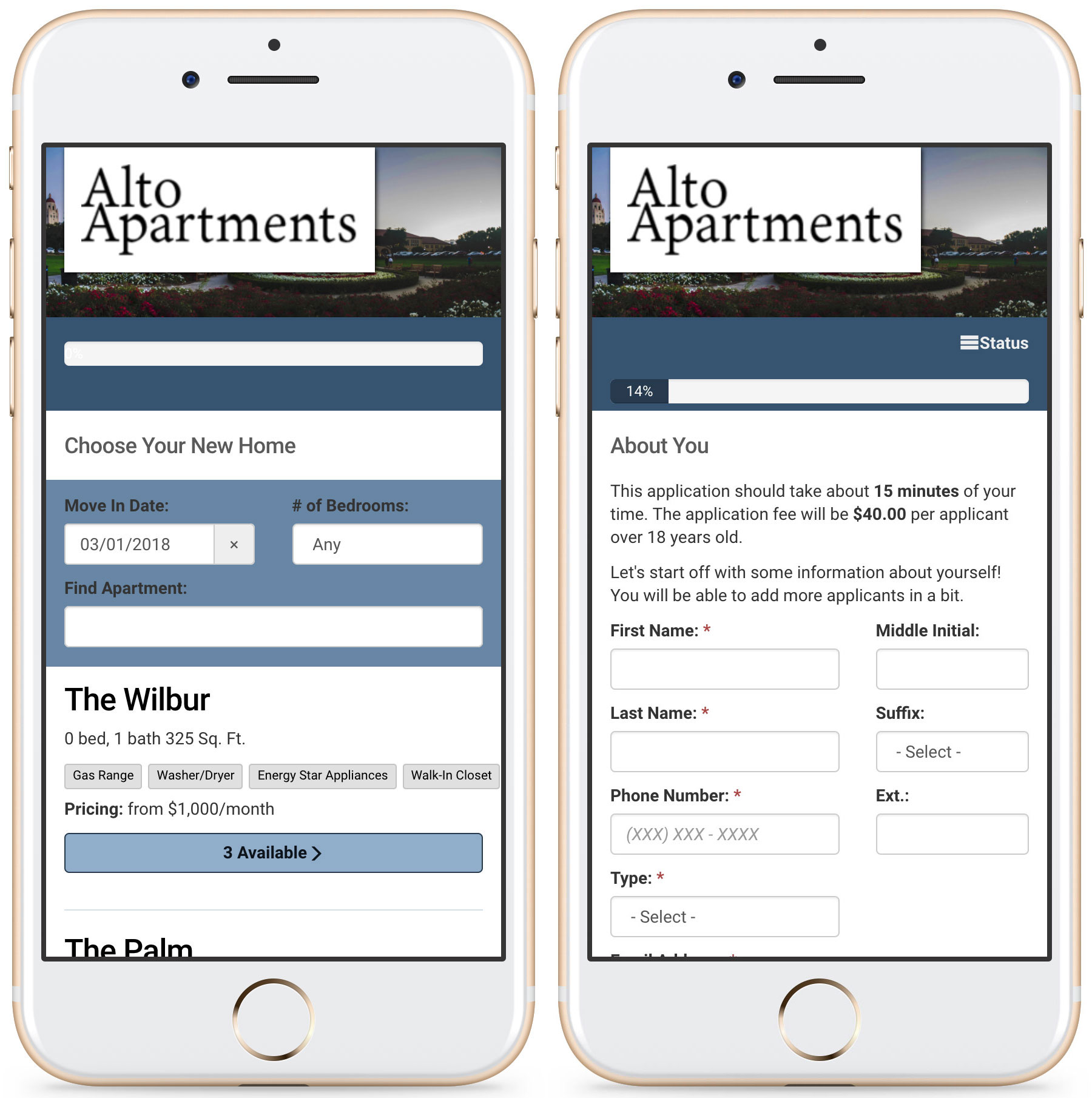 As our application was responsively designed, these are the same pages as above, just in a mobile-sized format. 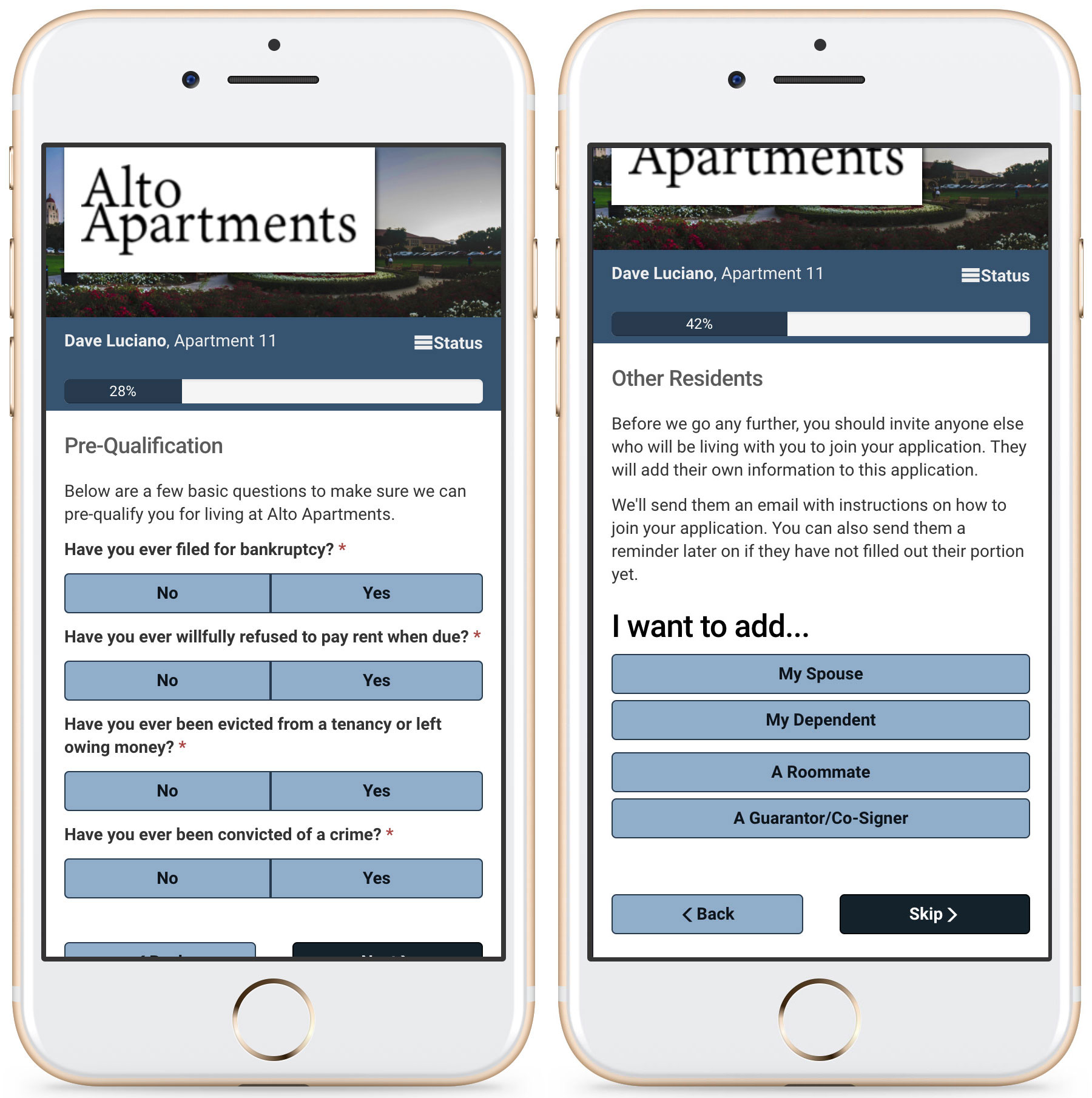 In some cases, the UI would adapt a bit more than just shifting around: on the "Pre-Qualification" page above, the No/Yes buttons are normally radio buttons on desktop. 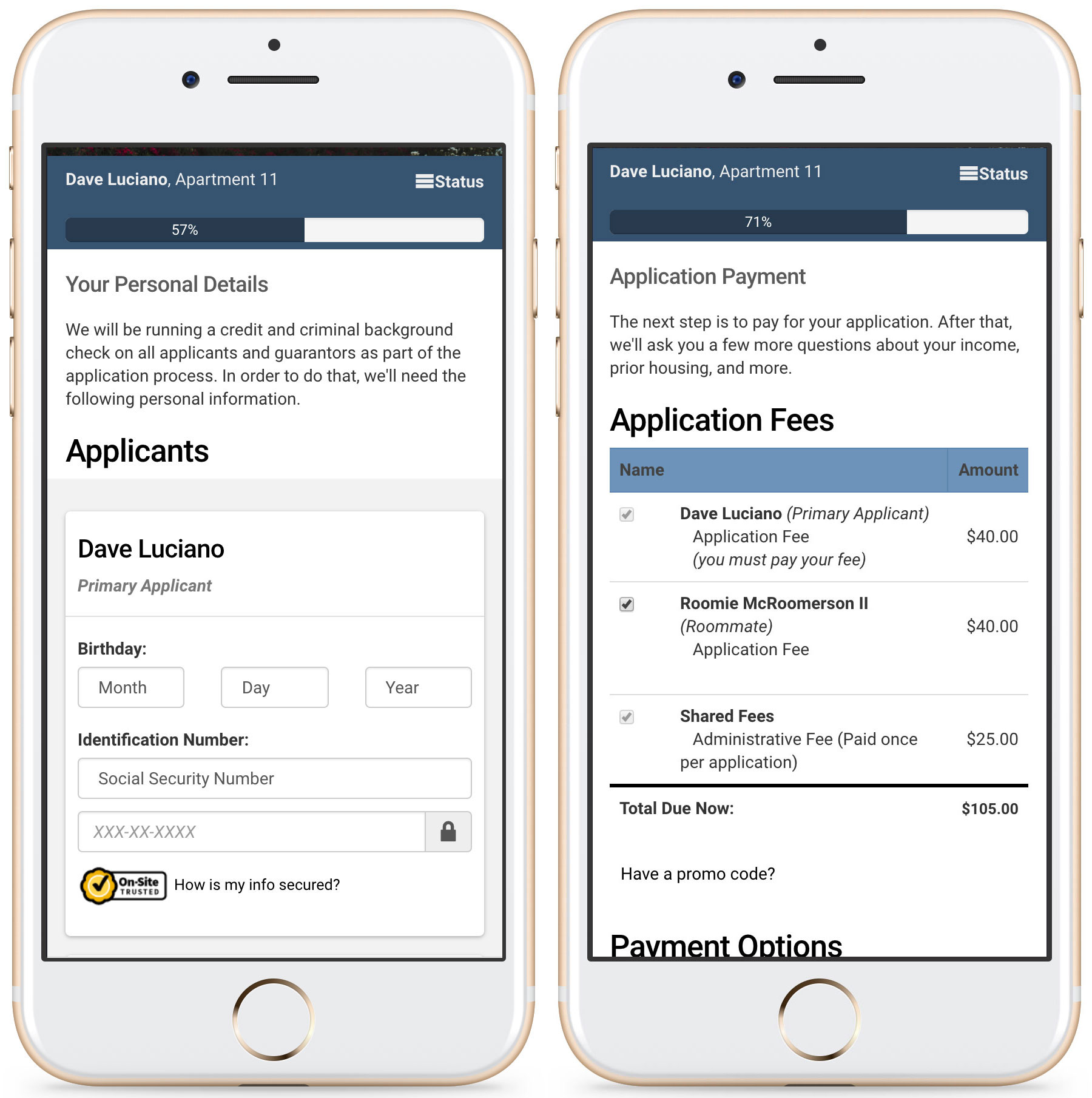 In other cases, we adopted a card format, such as the Personal Details page on the left (which could potentially list multiple applicants). 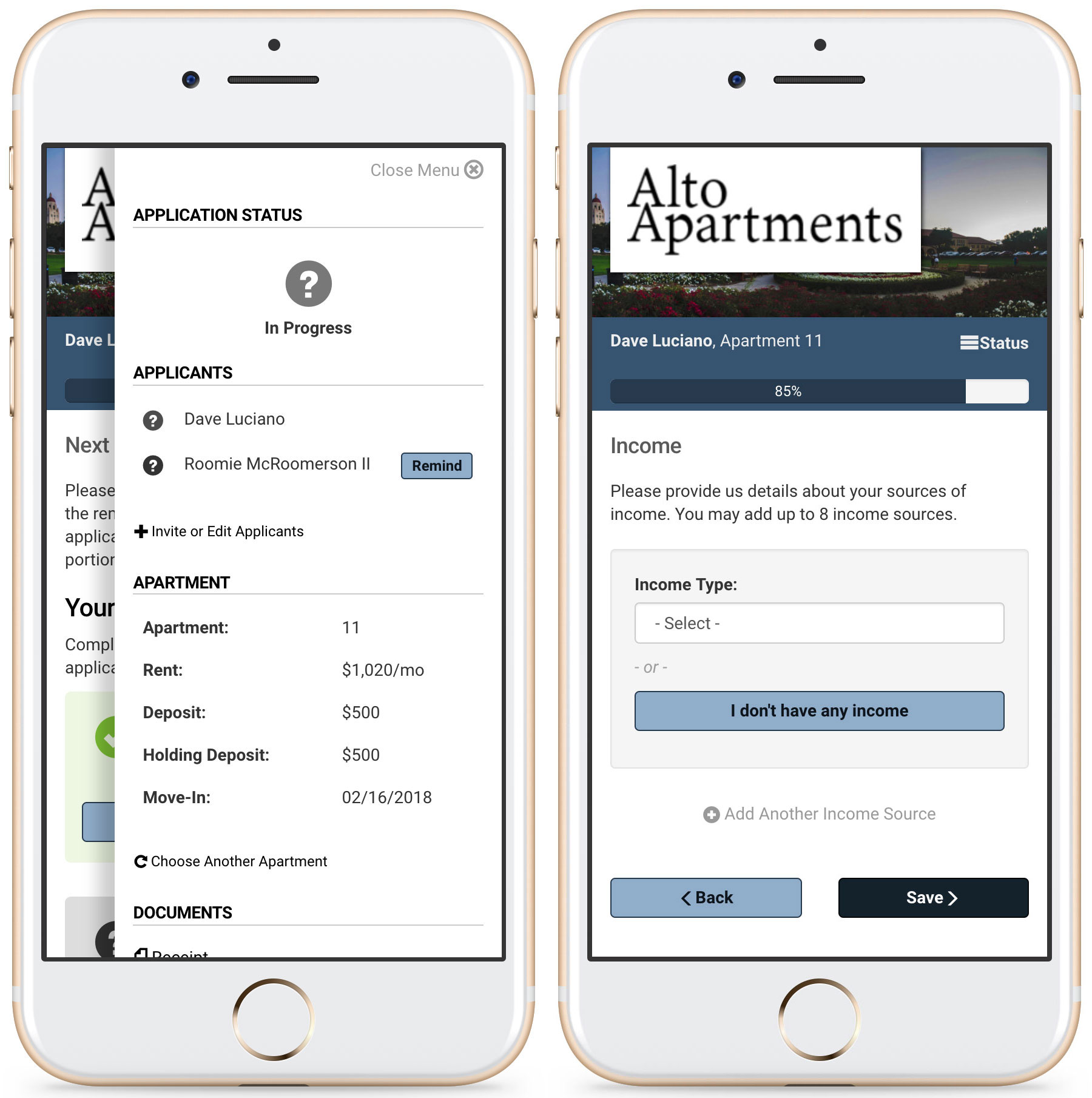 The sidebar that appears on the desktop version was collapsed into an off screen menu. 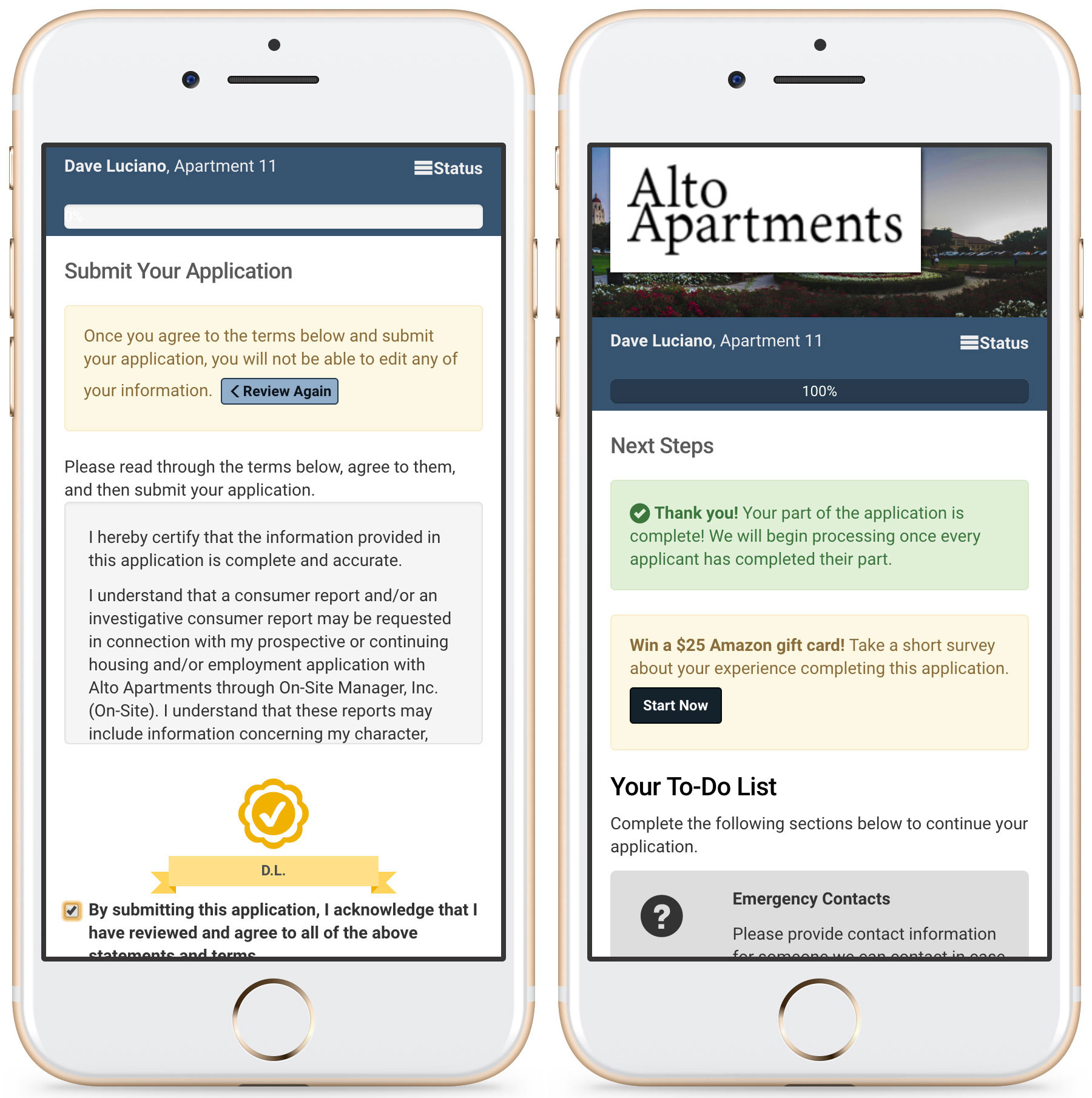 The flow of the application remained identical on mobile, ending with the "sign and submit" step.

On-Site.com, a subsidiary of RealPage, Inc.